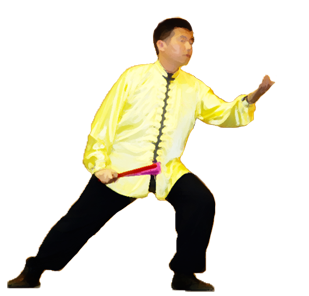 In step with fading art of kung fu 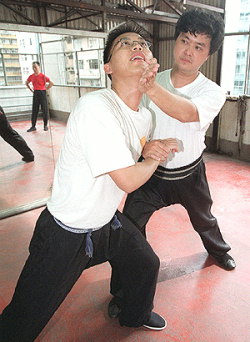 STORY: ON the roof of an old building in Wan Chai they imitate the moves of animals and insects painstakingly every Sunday morning.

The neighbours peek out of their windows as the men go through their paces like the fighting monks of old.

In a white T-shirt and black pants he has fastened with a cloth belt, master Lam Wing-kit, 38, leaps silently from side to side, moving his arms in a curious rhythm.

A handful of students stand quietly and watch his every movement - fast, silent and sure.

A martial arts instructor for 25 years, Mr Lam trains people in the execution of popular kung fu styles, such as tai chi, wing chun and pak ga. But he is probably more popular as the accomplished "teacher'' of the "weird'' techniques: monkey boxing, eagle claw and praying-mantis boxing.

As coach of the Martial Arts Club of the University of Hong Kong since 1995, as well as four other clubs across the Special Administrative Region, Mr Lam says the promotion of traditional Chinese martial arts is his lifetime mission.

"Kung fu is the art of action,'' he says, watching his students as they move as one in front of a mirror.

He remembers his first encounter with martial arts.

"I was 12 and at that time kung fu was a big hit,'' Mr Lam recalls. "One day, when I was playing football in a park, I saw one of my classmates practising martial arts and I thought it was fun. Later he introduced me to his master.''

But it wasn't easy for the young boy to pursue his new-found hobby in the beginning.

"At that time, those who studied kung fu fighting were perceived as bad boys,'' Mr Lam laughs. "I had to hide this secret from my parents. They only found out about it after I graduated from secondary school.''

The coach cheerfully remembers how he first emulated praying-mantis boxing - a style which originated in the northern parts of the mainland.

Nine months after he discovered the art of self-defence, young Mr Lam went with friends to look for a praying mantis on a grassy hillside in Ho Man Tin.

"We found one, and looked at it closely,'' he says. "I was ignorant and thought I had to imitate all the actions and postures of the insect. But later I realised this was not what it was about.

"We do not totally imitate the praying mantis. We imitate how it hunts its prey.''

Praying-mantis boxing is a comprehensive kung fu style, he says.

"This kind of boxing combines 18 different kung fu styles and the hunting actions of the praying mantis into one. The variation of the style is broad and has at least 50 sets of positions.''

There are intriguing stories about the style's origins and its founder, Wang Lang, during the late Ming dynasty.

"Once, inside an ancient temple, Wang Lang lost a boxing match to an abbot and immediately left the temple,'' Mr Lam says.

Wang Lang went deep in the woods and decided to meditate and rest.

One day, as he meditated, he watched a praying mantis catch a cicada and was astonished by the insect's skill. He reached enlightenment by developing praying-mantis boxing.

Returning to the temple, he won a return bout with the surprised abbot.

Mr Lam is writing a book in Chinese on the praying-mantis style and another, a bilingual volume, on the eagle-claw style. Both works are expected to be published by December.

Even after all these years, Mr Lam has no particular preference for any style.

"I love traditional martial arts,'' he says. "Each kung fu style has its own merits and if I had only learnt one I would have missed out in all the others.''

Despite its growing acceptance in the West, the coach laments the declining popularity of traditional kung fu in Hong Kong and the mainland.

The coach adds kung fu presentations also used to draw a full house, but their audiences are "very few'' these days.

"It seems no one cares about traditional Chinese martial arts any more,'' he sighs.

One of the reasons for the decline, he says, is the mainland's neglect of traditional martial arts. The Central Government only started promoting the martial art to the world in the mid-1980s, and participants now go to competitions only to gain fame, he says.

"Many practitioners ridiculously amend the traditional kung fu styles and tailor them according to national styles,'' he says. "As a result, the development of traditional martial arts has been affected.''

If the promotion of these self-defence techniques seems an uphill battle, the determined Mr Lam does not seem to care.

Wiping sweat from his brow, he says: "Although I am not the most skilful in all traditional kung fu styles, I teach what I know to people. I don't want to see this tradition disappear into history.''